Paralympian Dana Mathewson Advocates for Tennis for Everybody 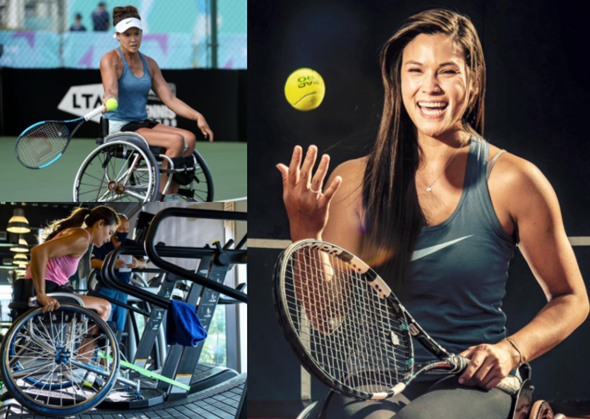 The #1-ranked female professional wheelchair tennis player in the US and 2x Paralympian Dana Mathewson recently spoke with JTCC. JTCC is dedicated to providing “Tennis for Everybody” and has proven that commitment through providing access to tennis for wheelchair users and people with disabilities.

When she was 10 years old, Dana contracted the rare autoimmune disease Transverse Myelitis, taking her from an active child to a wheelchair user in a matter of minutes due to the rare disease attacking her spine. Though she was an avid soccer player and athletic kid, she had no desire to participate in adaptive sports post-trauma. “When I heard about wheelchair sports I imagined something like the Special Olympics. But that’s not right, that’s not where I belong, because my brain is fully functioning. Why should I be playing wheelchair sports? Part of me was not able to accept this was how I had to play sports now if I wanted to compete,” Dana explains. Her mom drove her “kicking and screaming… well, not so much kicking anymore” to an adaptive sports camp in San Diego. There, she realized, “It was just normal kids who happen to use wheelchairs. I couldn’t believe it, and I made so many friends. For that to come at that time in my life was so crucial, and I found a sense of identity. I saw how competitive disabled athletes are and I loved it.”

She first tried wheelchair tennis at an ITF camp, and describes the feeling as “something just clicked. The first time I got in a tennis wheelchair and got a racket in my hand…that was it.” She trained twice a week with a group of wheelchair tennis players at the Barnes Tennis Center in San Diego for a few years before getting her own coach. She went on to play collegiate wheelchair tennis at the University of Arizona while pursuing her undergraduate and doctorate degrees in Audiology. However, she took three years off from wheelchair tennis from her sophomore to senior year, saying, “I felt like I needed a mental break from tennis…my appreciation for the sport came back because I chose I wanted to play, not just because it was what I did.”

Since 2009, Dana has represented Team USA in nine World Team Cups and two Paralympics, Rio in 2016 and Tokyo in 2021. When asked about her favorite tournament experience, Dana says, “Playing at a Paralympic Games was huge for me. Rio was my first Games – I was so nervous and excited. Our first doubles match, Kaitlyn Verfuerth and I played against Brazil, so they put us on center court and it was packed. I’d never played in front of that many people in my life, and I haven’t since! They were so loud – cheering and booing, and that was the coolest environment. Luckily we won that match!”

Surrounding the 2020 Tokyo Paralympics was the movement WeThe15, which draws its name from the statistic that 15% of the world’s population – 1.2 billion people –  have a disability. Looking back on that, she states, “It was exciting to share that we are a big portion of the population, and to have that happen around Tokyo and the Paralympics where you’re feeling pride for your country and disability sport was amazing. I didn’t even know that 15% of the world’s population had a disability before the movement, and  that awareness itself in the statistics is a win.”

“We [people with disabilities] are a marginalized group no matter where we live in the world. In the US especially, I always say we are the most progressive in terms of physical accommodations for people with disabilities but in terms of how mentally people react to disability we are one of the furthest behind. Most people are like how I was when I was injured, saying I’ve never heard of athletic people in wheelchairs before, not knowing how to talk to someone in a wheelchair, thinking you need to speak slowly.”

“How much good would it do if people were just aware that the Paralympics were a thing, it doesn’t mean you have to buy tickets or have to watch it, but just to know that it exists? That would already be a massive win. Anything that can increase people’s awareness, I’m all for it. I think it’s the first step.”

As a woman in the sport, she shares how impactful representation and role models have been to her perception of her ability. “ A big reason why I wanted to play is that when I started I met all these [female] Paralympians that played, so it’s crazy to think that I can be that person for someone now. I think that helped, seeing an example of someone and then you’re like, ‘Wow I can do that, I want to do that,’ whereas if it’s only males you look at, then it’s like, ‘Well, maybe I can do that after school, but I haven’t seen any professionals like myself.’ It’s up to people like me and Shelby [Baron] to go out and speak to the young girls or go to different camps. A big part of why I felt like I could do what I’m doing is because I met people who had done it.”

Her career on-court has been met with challenges too – and a major issue is the lack of prize money that is present on the tour and in the Grand Slams. In the 2022 Australian Open, the winner of the men’s and women’s singles draws earns $2.875 million each. The total pool of prize money for Men’s, Women’s, and Quad (quadraplegic) singles and doubles events is $863,166. A first round winner in the able-bodied singles draw of the tournament took home $103,000. The champion of a singles wheelchair tennis division only profits $69,057.

Dana shares, “Having the prize money so much lower is insulting. The prize money is a big indicator of how valued we are at a tournament like that. If you’re going to pay the winner of our division less than what you’re paying a first round loser on the able-bodied side, that’s insulting, because we worked just as hard to get there, even for us to qualify for the Slams is much harder.”

Dana is talking about the small draw sizes being a major barrier to qualifying for the Slams – there are just eight players in each division for wheelchair tennis. As the #1 female wheelchair tennis player in the US and #8 in the world, she struggles to gain entry to Grand Slam tournaments. “For us to qualify for the Slams is much harder than it is for an able-bodied athlete because only seven players get direct entry and one player gets a wild card. I think it’s incredibly frustrating and they should allow us to have larger draw sizes in the first place. I’m #8 in the world, and I don’t have direct entry into slams – that’s ridiculous! Roland Garros just announced they are increasing draw sizes so now 12 players are in, and I can have a sigh of relief.”

“I understand when we first became integrated [into the Slams] our depth of play wasn’t that strong, so having eight players probably was the right number for that time, but now, there’s hundreds of people on our tour but the world only knows about eight, because the same exact people go to every single slam. I’m excited they’re increasing draw sizes in France.”

“Our prize money is laughable. I was talking to Danny [Daniel Caverzaschi, Spanish wheelchair tennis player]. He’s #11 or #12 in the world, and he was just saying on tour events he only made $10k last year. You cannot live on that, and he’s #11 or #12 in the world! A lot of times we are at a loss when we travel somewhere. Being in the green on the tour only happens when you play the Slams. It’s life changing money if I can get into the slams. I’ve been playing slams the past 1.5 years or so, off and on, but if not for that I would have had to retire already. There needs to be a lot of reform in that respect.”

A major step forward, however, has been the recent integration of wheelchair tennis into all operations at the USTA, making it the first national governing body to successfully integrate their adaptive sport. Dana shares, “It’s super exciting for me and my experience being integrated into the player development side at USTA. I’m #1 in the country and if I want to go work out and Frances Tiafoe is there it shouldn’t be weird, and it’s starting to become that way. We train as much as able-bodied professional tennis players – now that I train at USTA I know it’s true, we do the same pre-match warmups, fitness, recovery, physios, we deserve the same respect.”

“To me that’s what integration means. In so many places still, having someone in a wheelchair be a part of a group, or wheelchair tennis be integrated is sort of a novelty, it’s not necessarily taken seriously. [At USTA], you can notice a difference and change where people are noticing wheelchair tennis for the first time all across different departments of the USTA and that it is a serious sport, they’re trying it and seeing how hard it is, you can see the value is being recognized and brought into the company. For players like myself it’s more inspiring to work hard because you see that you’re being treated the way you want to be treated.”