No Riske, No Reward 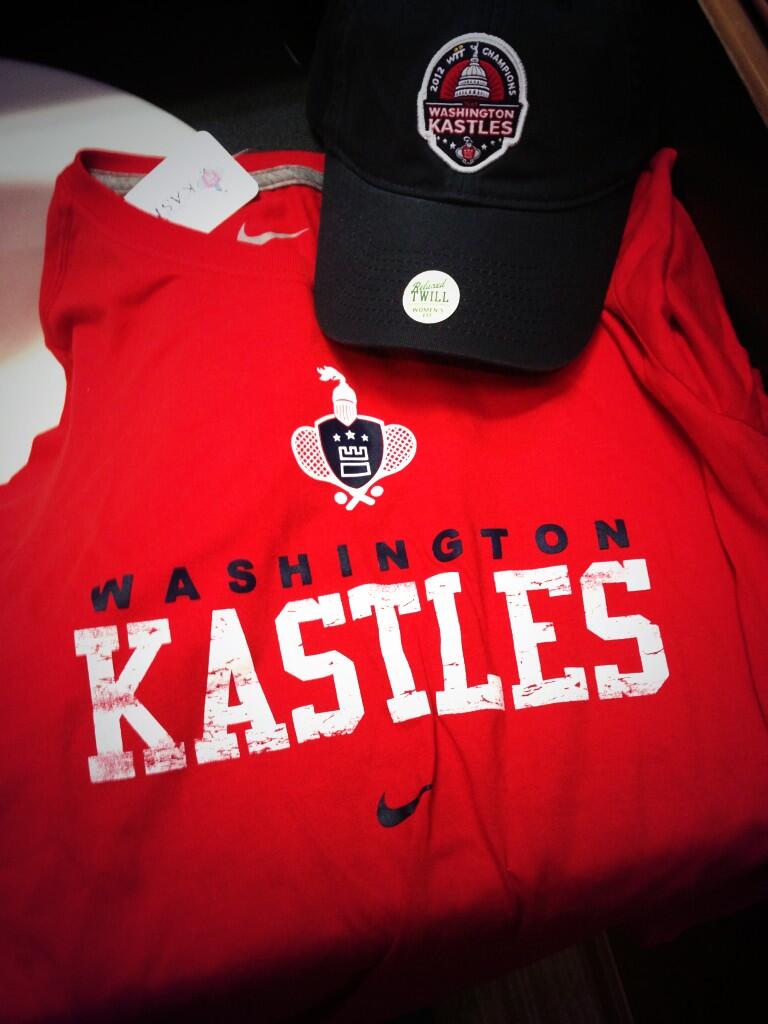 Before her World TeamTennis debut, Alison Riske (@Riske4rewards) tweeted out the above photo of her Kastles gear

She is now part of history.

Alison Riske, WTA Tour player, was tabbed by the effervescent Coach Murphy Jensen to serve as an alternate for the Washington Kastles squad during their home opener on Monday, July 8.  The Kastles, the gold standard in World TeamTennis (WTT), defeated the New York Sportimes to tie the Los Angeles Lakers for the longest winning streak in professional sport history.  The Kastles then surpassed the purple and gold with a victory (their 34th straight) over the Boston Lobsters on Tuesday, July 9.

“Coach Jensen told me to be ready because you never know what could happen,” said Riske.  “I felt confident though that once Martina [Hingis] played singles that she would be fine for the rest of the match.”

Riske and Hingis were joined on the bench by Venus, Bobby Reynolds, Kevin Anderson, Anastasia Rodionova and Captain Leander Paes.

“I was sitting next to Venus on the bench,” said Riske.  “She was very friendly.  The whole team was so welcoming.”

For traditional tennis fans, the WTT format can be a shock to the system.  Substitutions are permitted mid-match. Overtime is a distinct possibility if the trailing team wins the final set.  Coaching is not only allowed but encouraged. And blaring music pierces the air in between serves.  Wimbledon this is not.

“They move quick,” noted Riske.  “But at the same time the match was two hours so you have a lot of intermissions.  You can have timeouts too which was odd.”

“I did not get to shake hands with her [First Lady Michelle Obama],” said Riske.  “But we all got a picture with her afterwards.”

“I was walking behind the covered awning and someone asked me ‘Do you know who you are about to meet?’,” said Riske.  “I said no and then I turned around and she was back there.  Billie Jean [King] was back there as well.  She [Billie Jean King] was trying to get me to play some more matches for another team.”

In less than 48 hours following her WTT debut, Riske latched on with the Philadelphia Freedoms.  She replaced an injured Sloane Stephens and was immediately inserted into the starting lineup last night (she won her singles match, 5-3).

Riske is an emerging talent on the tour.  Earlier this month, she capped off the grass court season by advancing to the third round at Wimbledon.  The opening round win was her first Grand Slam victory.  The impressive showing vaulted Riske to No. 102 in the world.

“This year was a bit different because I have been there [Wimbledon] before and played in the main draw,” said Riske.  “I finally believed that I belonged there.  Hopefully, from here on out, it will be that way.”

“I absolutely love it here,” said Riske.  “I wish I had known about it sooner.  It is like a family atmosphere.”

The admiration is mutual.  It was appointment television when Riske competed at Wimbledon.

“Players texted me when I was in Europe,” said Riske.  “Sydney [Rider], Nadia [Gizdova] and obviously Justin [Boulais] and Isabelle [Boulais].”

“Yves was sending me photos of the kids huddled around the phone when I was playing,” added Riske.

Despite the career-altering achievement, the 23-year-old is zoned in on improving her ranking and focused on preparations for the next tournament.

“Right now, I should be in on my ranking,” said Riske.  “I’m looking to get in as many matches before the US Open as I can.”

“I’m hoping that my Wimbledon result is something that I can build on,” continued Riske.  “I’m almost in the top 100 now and I hope it is just the beginning of what is on the horizon.”

With an incessant desire to improve and even-keeled temperament in tow, she will soon be re-writing the history books on her own.