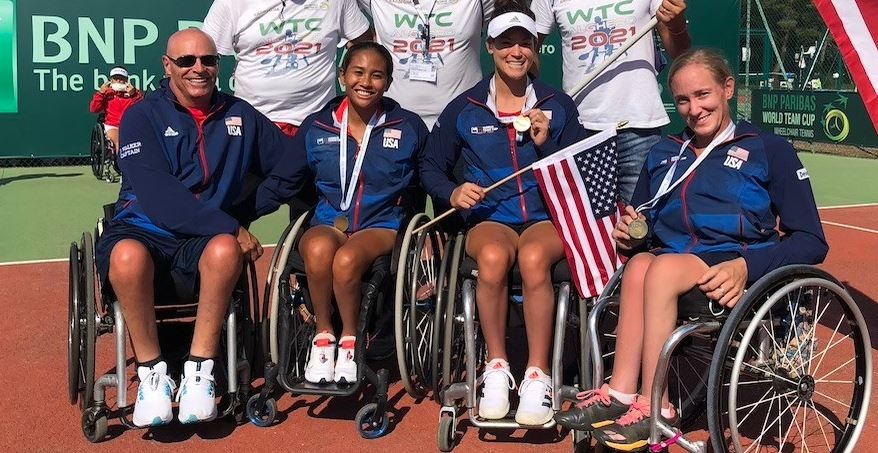 JTCC is proud to welcome two highly respected Wheelchair Tennis coaches to College Park this summer for the inaugural USTA JTCC Wheelchair Tennis All-Comers Camp on July 29-31. There are 24 spots in the three-day camp that is designed for Wheelchair players of all ages and abilities, including juniors and adults.

Shelby Baron has been a member of the Team USA Paralympic Wheelchair Tennis Team since 2010 where her exemplary play earned her a place competing in the 2016 and 2020 Paralympic Games. Her impressive results included reaching the quarterfinals in doubles and the Round of 16 in singles at both Games.

She was the first person to receive a full Adapted Athletics tennis scholarship at the University of Alabama, where she helped her team secure four national championship titles as a member of the Adapted Athletics Wheelchair Tennis Team.

The Hawaii native is PTR and USPTA-certified and began coaching both able-bodied and Wheelchair players in 2013. In 2019, Baron’s outstanding coaching was recognized when she was named “PTR Wheelchair Professional of the Year.”

Baron continues to inspire others as the Assistant Wheelchair Tennis coach at her alma mater, leading the University of Alabama to a six-title streak with two additional national championship wins.

“The experience and expertise that Shelby brings as a player and a coach will take the camp to the next level,” JTCC Marketing Manager & Head of Wheelchair & Adaptive Tennis Gabby Hesse said. “We are thrilled to have her join us.”

Joining Baron to lead instruction will be USTA National Coach Paul Walker. Walker’s tennis background includes a litany of success both as a player and a coach.

As a professional, Walker was named the PTR Wheelchair Player of the Year in 2003. In 2005, Walker made history by competing in the first U.S. Open Wheelchair Competition. During his eight years on the professional wheelchair tennis circuit, he reached a career-high ranking of #4 in the United States and # 31 worldwide.

“Paul Walker was the person who introduced me to wheelchair tennis when I was a college freshman and to have him come here to lead a camp feels like a full-circle moment,” Hesse said. “I’m thrilled for the opportunity for our Wheelchair players to learn from him. I now look forward to learning more from him as a coach instead of seeing him as a college player.”