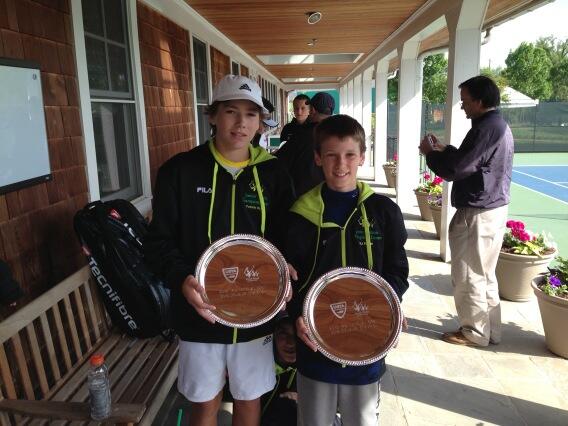 The label ‘best kept secret’ may be out of date.

It was an all-JTCC affair as No. 1 seed Patrick Kypson defeated No. 7 seed Andrew Fenty, 6-1, 6-2.  Kypson sailed through the competition as he did not lose a set over the three-day tournament.  Fenty also had a strong showing in the event as he upended the No. 2 seed in the Quarterfinals.

Two JTCC teammates squared off as No. 3 seed Raveena Kingsley was pitted against Isabelle Boulais.  Kingsley edged Boulais, 6-3, 6-1.  Boulais  had previously knocked off two seeded opponents (the No. 4 and No. 2 seed).  Kingsley only lost twelve games in five matches.

In a nail biter, the JTCC duo of No. 2 seed RJ Fresen and Patrick Kypson (picture above holding their first-place trophies) earned a hard-fought victory, 8-5.

In line with the pattern of the morning, a pair of JTCC athletes were involved in this final.  Isabelle Boulais defeated Valerie Ho, 8-1.

For good measure, No. 2 seed Justin Boulais capped off National Open play with a victory, 8-6.