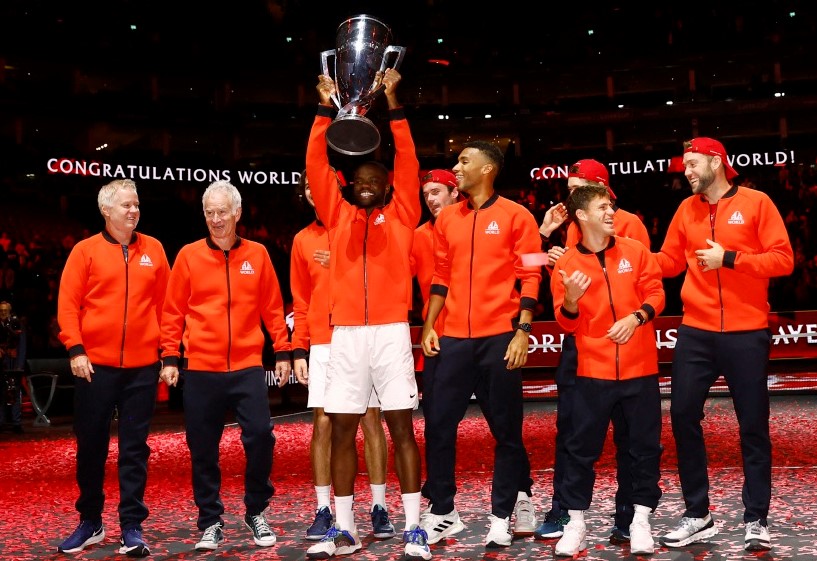 JTCC alumnus Frances Tiafoe’s star continued to shine with his history-making performance on Sunday in Laver Cup action in London.

The world #19 earned a scintillating come-from-behind 1-6, 7-6 (11), 10-8 victory over Stefanos Tsitsipas, which was the decisive point in Team World’s first triumph over Team Europe in the event’s five-year history.

“I kept saying all week, this was our year,” Tiafoe remarked. “We all did it together, it wasn’t just me. I showed a lot of heart to get it done.”

Following his impressive run to the U.S. Open semifinals with a win over Rafael Nadal, Tiafoe continued his torrid play on Friday night, partnering with Jack Sock to knock off Nadal and Roger Federer in the Swiss superstar’s last competitive match.

The Hyattsville native raced out to an early lead in the super tiebreaker, showcasing his quickness and jaw-dropping shot-making ability.

After the inspiring victory, Tiafoe collapsed to the court in disbelief and was buried under a pile of joyous teammates and captain John McEnroe.

“No one beats Team World five times in a row,” McEnroe said after the match. “Felix [Auger-Aliassime] stepped up big time. Frances is prime time. We saw that at the U.S. Open. Laver Cup is an incredible team event, and I loved every second of it.”

Dating back to the U.S. Open, Tiafoe has won 12 consecutive tiebreaks in his last two events, which include singles victories over Nadal, Stefanos Tsitsipas, Andrey Rublev, and a doubles win over the legendary pair of Nadal and Federer and which have earned him bragging rights for having defeated both Nadal and Federer in back-to-back events.

Tiafoe is scheduled to compete next week in The Rakuten Japan Open Tennis Championships, an ATP 500 event in Tokyo.