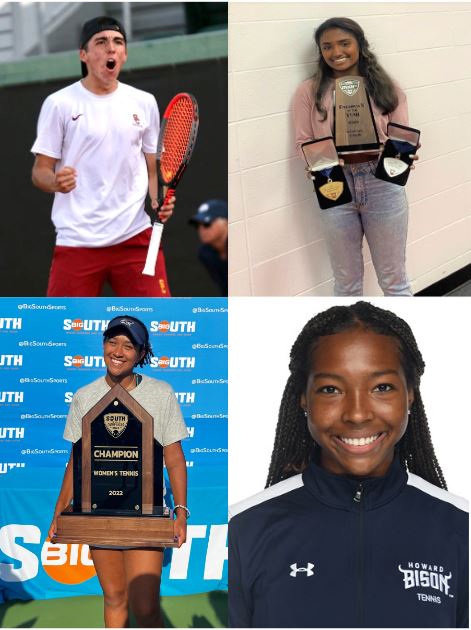 Here’s a recap of their exceptional performances and memorable stories.

Being a freshman in college can often take time to adjust, but for JTCC alumna Jordan Grayson, the transition was essentially seamless.

“Coming in as a freshman, I felt there was a lot of pressure to rise to the occasion,” Grayson said. “To be named player of the year after the season we had gone through, and everything we had done to prepare was really rewarding and great.”

Grayson led the Bison to an undefeated season in MEAC play, securing the conference title. The #1 player in both singles and doubles, Grayson credits the chemistry among teammates as one of the main reasons for the team’s success.

“When we all got here, there was an instant connection between the freshmen and the rest of the team,” Grayson said. “We had a great recruiting class with my year, and it showed both on and off the court because we all got along.”

Grayson trained in the JTCC after-school program for four years starting in 2017 and is excited to return to College Park this summer to continue her training. She credits JTCC for teaching her valuable lessons that prepared her for college.

“JTCC helps you learn how to balance the tennis and school aspect because it’s a high-performance center and is demanding for what it asks from you,” Grayson commented. “Although it was a transition and college classes are different, it paved a nice path to help me better adjust.”

One of seven freshmen on the Miami University (OH) women’s tennis team, Nishitha Saravanan needed to do something to stand out from the pack. After compiling a sterling 15-4 record and being named Mid-American Conference Freshman of the Year, Saravanan’s impact has forever been ingrained.

The seventh honoree of the prestigious award in program history and first since 2019, Saravanan trained at JTCC from the summer of 2015 – 2020. After starting in the Champs I program after school, she moved into the full-time program from her freshman to junior year of high school before heading to Ohio.

“Coming into school with everything was challenging, but I fought through it because of my amazing coach,” Saravanan exclaimed. “[Head coach Ricardo Rosas] helped me through a lot. Winning this title not just for myself but for him was amazing.”

For Rosas, who was named Co-Mid Atlantic Conference Coach of the Year and participated in the U.S. Open, French Open, and Wimbledon as an 18-year-old in 1993-94, he’s excited for the future of his budding star.

“I am proud of Nishitha. She came into our program with a solid tennis foundation and values preparation and teamwork. I was excited to find out she was named freshman of the year, and I’m looking forward to seeing her grow and develop in all aspects of her life as a player and person.”

“I think I learned a lot at JTCC from the coaches and players on how to handle different circumstances and how to fight on court and battle until the end,” Saravanan said. “I know that for me specifically, when I was on the court, I would be thinking about what coach Megan [Moulton-Levy] would tell me in doubles to crowd the net and not have any doubts.”

The Redhawks earned a share of the MAC regular-season title with Ball State. Saravanan notched an 8-2 record at number three singles and a 7-2 mark at number three doubles in MAC action.

Saravanan accounted for the team’s only point in a 4-1 loss to Toledo in the MAC Tournament semifinals, but her strong performances in the Tournament earned her All-MAC Second Team honors. She hopes to return to JTCC this summer to see familiar faces and continue training.

“I still call Stefan Regalia and Cyrus Mahjoob my little brothers, and Ekansh Kumar is my best friend, so I do my best to stay in touch with them as much as possible,” Saravanan said. “We moved back to Virginia, so it is going to be hard for me to be back at College Park a lot, but I will make sure that I come back once a week to keep in touch and keep hitting because it is like a home and family to me there.”

“Ryan did an incredible job for us this first year. Coming to school in January is never easy, and doing it when he should have still been in high school made it even better. His tennis IQ and ability to pick up weaknesses in his opponent are some of the best I’ve seen.” Masi explained.

“We are excited to see where Ryan’s tennis will take him these next three years. He has such unreal upside,” he predicted. “I can’t wait to help him develop into one of the best college tennis players and pursue that dream of becoming an outstanding professional.”

One of JTCC’s most successful junior players who was ranked #2 in the USTA Boys’ 18s, Colby flourished as a freshman at the University of Southern California (USC), posting a 20-6 overall record in singles while helping the Trojans capture their third consecutive Pac-12 Championship.

Upon his arrival at USC as a freshman in January, Colby was immediately thrust into action playing #4 singles for a program with 21 National Championships, and he felt the weight of personal expectations as the season began. At 18-years-old, Colby was the youngest player on the team.

“When I got there, I definitely felt I had to prove myself,” he recalled. “I think that is one of the things that hurt me in the beginning. I cared so much about proving myself to my teammates that I wasn’t focusing on the aspects I needed to work on.”

Colby’s confidence grew as the season progressed. Relishing the energy and camaraderie of the college team dynamic, Colby had one experience midway through the season that he will never forget.

In a match against rival and fellow perennial powerhouse Stanford, Colby provided the clinching point for USC, defeating Stanford’s Alexandre Rotsaert 7-6 (5), 7-6 (5) to propel nationally ranked #15 USC to a hard-fought 4-3 victory over #13 Stanford at Marks Stadium at USC.

The memorable moment was forever captured by a joyous and dancing Colby being mobbed by teammates who immediately rushed the court.

“It was a great feeling,” he recounted. “One of the reasons I came to college is that I love that feeling of camaraderie, and in college, it’s so much greater because you have guys cheering for you while the other team is chirping at you, and I love it.”

During a fantastic freshman season at Charleston Southern, while compiling a 21-5 overall record (10-4 in singles and 11-1 in doubles) and helping the Bucs capture the Big South Championship, Noa Boyd had a crucial positive revelation about playing college tennis.

“The biggest adjustment from junior tennis was it not being an individual sport anymore,” Boyd said. “In junior tennis, it can be a little lonely, but in college, it’s a completely different environment, and you have a whole team backing you, which is exciting. It is not about you. It is about the team.”

The JTCC alumna played a vital role in the Bucs achieving a 17-6 record, which earned the team their third NCAA appearance.

“One of my favorite memories from the season was when we played Georgia Southern, and I was initially down 5-0. Something snapped inside me, and I was like, I can’t lose this match, and I came back and won the set 7-5,” Boyd commented. “I previously struggled with closing out matches, so that match gave me confidence, plus it was awesome experiencing all the great energy with the whole team being hype.”

Boyd and her teammates were also recognized for their performance in the classroom registering the highest-grade point average of any team on campus.

“In the beginning, it seemed like it was going to be easy balancing academics and athletics, but once we played more matches and traveled, it got harder,” Boyd said. “My team prioritized academics, and a lot of the times we would all study together and hold each other accountable, which made it easier.”

Boyd trained at JTCC for 11 years from age seven to 18 while progressing from Junior Champs to Champs I and on to the Champs II program.

Boyd credits her experience playing at JTCC for preparing her for her successful freshman campaign and aims to continue to improve this offseason.

“JTCC prepared me for playing a lot of different players in college, whether it was someone who plays with a lot of power, pushes, or hits trick shots,” Boyd said. “I got a lot stronger in college, so I want to maintain that strength by going to the weight room and improving my movement on the court.”