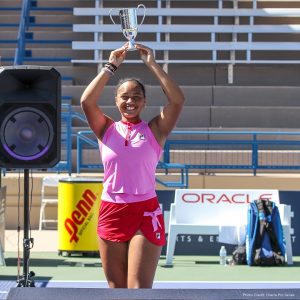 The unseeded Montgomery’s run was remarkable. The world #5 junior scored victories over two players in the WTA top 300 rankings before confronting WTA #192 You, who was the #3 seed. After trailing 6-2, 3-1, Montgomery stormed back by winning five games to take the second set 6-3. Montgomery demonstrated her characteristic resiliency in the third set breaking You three times to win.

A Washington, DC native, Montgomery discovered tennis in 2009 at the age of five through JTCC’s GEICO Game On! community outreach program. Coaches identified Montgomery’s talent, drive, and passion for tennis and offered her the opportunity to train at JTCC.

“Robin’s work ethic is on display every day at JTCC,” commented JTCC CEO Ray Benton. “Her success on the court is a testament to her dedication off the court.”