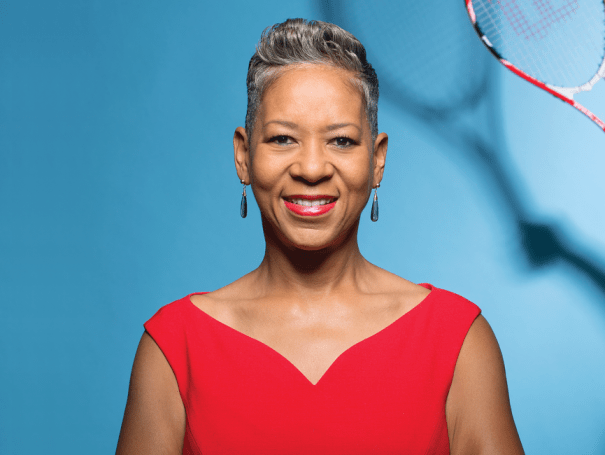 From the tennis court to the boardroom, Katrina Adams’ impact on tennis is encapsulated by a series of historic firsts.

The former professional player won 20 career doubles titles and was ranked in the world top 10 during her 12-year career. Adams is the first African American, first former professional tennis player, and youngest person to be named USTA Chairman, CEO and President.

The only USTA President ever elected to serve two terms, Adams, who served from 2015-18, was named to Forbes magazine’s “Most Powerful Women in Sports” list in 2017.

In 2021, Adams documented her inspirational journey with the publication of Own the Arena: Getting Ahead, Making a Difference, and Succeeding as the Only One.

“I had a lot of pressure being the ‘first.’ Being the first former player, the first African American, and the youngest. All eyes were on me, as I would likely be scrutinized more because it was unfamiliar territory for those around me,” she recounts. “I had to be extra knowledgeable of decisions and how I represented the organization, especially being black. We have always had to work twice as hard to get recognition for our accomplishments,”

In her three-part video series with JTCC, Adams talks about her passion for improving the lives of Black children as Executive Director of the Harlem Junior Tennis & Education Program, what it was like playing tennis growing up in the Midwest, and the significance of Black History Month in relation to her career.