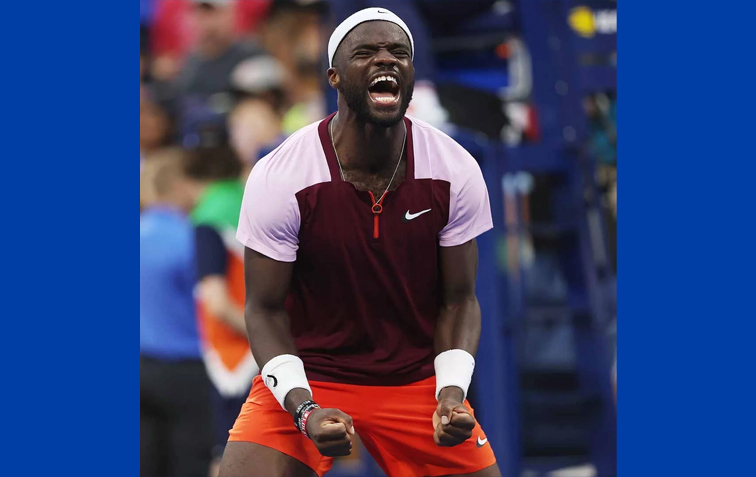 JTCC alumnus Frances Tiafoe sent the sports world into a frenzy Monday afternoon. The Hyattsville native earned a momentous 6-4, 4-6, 6-4, 6-3 victory over 22-time Grand Slam champion Rafael Nadal in the fourth round of the US Open.

Recording 49 winners, Tiafoe outplayed the No. 2 seed and handed Nadal his only loss at a Grand Slam this year in a scintillating match that lasted over three and a half hours in front of a raucous crowd of more than 23,000 fans in Arthur Ashe Stadium.

“It was obvious Frances’s fitness was still at a high level in the fourth set,” JTCC President Vesa Ponkka said. “Improving his stamina and physical conditioning has helped Tiafoe take his game to another level.”

Tiafoe continues to rely on JTCC’s training to improve his game. He added JTCC Fitness Director TC Costello to his traveling team in March. Since that time, he has moved into the top 30 in the world.

“Frances has always had a great raw athletic ability,” Ponkka continued. “TC has brought professionalism and accountability to his fitness training. Frances is much more precise with his footwork, and more importantly, he trusts his training. His confidence is at an all-time high.”

Tiafoe and his twin brother Franklin have roamed the grounds of JTCC since they were young after their parents emigrated from Sierra Leone in West Africa amid its civil war in the 1990s to the United States. His father, Constant, was in charge of maintenance at JTCC and the Tiafoe brothers would wander around the club, rackets in hand, emulating and watching the coaches and players.

After starting in the after-school training program, Tiafoe’s game blossomed. He progressed through the JTCC pathway to a full-time student before his talents led him to turning professional in 2015 at age 17.

Before losing to Tiafoe, Nadal was 31-2 in Grand Slams versus Americans and had won 27 straight since 2005 in a loss to James Blake.

To make the win even more dramatic, Tiafoe was down 3-1 in the fourth set before winning the final five games to secure his first appearance in the US Open quarterfinals.

At 24-years-old, Tiafoe is the youngest American man to reach the US Open quarterfinals since Andy Roddick in 2006.

“I was telling my agent, I felt like the world stopped. I couldn’t hear anything for a minute. Even shaking [Nadal’s] hand, I don’t know what I said to him. It was such a blur,” Tiafoe said following the win. “I was already tearing. I could barely see him and my team. Everyone was up. It was just wild. My heart is going a thousand miles an hour. I’ve never felt something like that in my life, honestly.”

JTCC alumna Robin Montgomery, who won the 2021 US Open Junior Girls’ Singles and Doubles, was elated for Tiafoe’s win and had a particular reason always to remember the day.

Tiafoe, who has only dropped one set in four rounds, will face Andrey Rublev for a place in the semifinals on Wednesday afternoon.

The American defeated Rublev in the third round at last year’s US Open in a thrilling five-set battle and is hoping to continue his winning efforts tomorrow. JTCC will host a watch party at 1:30 pm for players and supporters to cheer on Tiafoe.

Check out the highlights from Tiafoe’s win over Nadal here!